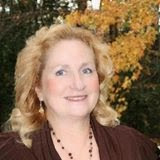 I have always had a fascination with myths and legends and love researching the origins of them. My creations have not only a real tangible foundation, but an innate ability to transform those who are drawn to them. I find that this, ultimately, makes my artwork visually interactive.

I found myself deeply drawn to research the writings of explorer Nicholas Roerch who went in search of Shangri-La, the name given to the mythical realm of James Hilton's classic novel Lost Horizon. This research has lead me down some very narrow paths, mentally trekking halfway around the world through books and visions. Up until recently I always thought that I had pinpointed the location down to a valley in the Kung Lun mountain range.

In 2013, I discovered a book by Willis George Emerson (1858-1918), entitled The Smokey God  (alternative title A Voyage Journey to the Inner Earth), which is also featured in a YouTube video. That research inspired the above painting and led me deep down the rabbit hole. It inspired me to put together my latest show, entitled Journey Into Hollow Earth. It is the remarkable true story about a fisherman named Olaf Jensen who lived near the North Pole. He and his father went on a long fishing trip that resulted in a most amazing journey. As the old quote suggests, “Truth sometimes is stranger than fiction”, as this boy and his father traveled further and further north until their compass started acting strangely, as if they were on the edge of the world. They kept sailing further north, yet found themselves in a climate that kept getting warmer instead of colder, as if going through the doorway into another world, a world inside of the earth, they called Agartha.

As they continued further into this magical world, sailing many miles, they were met by a huge ship crewed by people who were very friendly and who were about 12 to 15 feet tall. They took Olaf and his father back to their village and where they saw people standing on flying platforms and ships flying in the air. It was a world that was run on the earth’s own energy, utilizing anti-gravity, which I recognized from my other research, what Tesla envisioned for the world. I have always been able to combine deep insight in the mysterious and mystical with my artistic interests. The painting about Agartha, gives you an idea about how thick the earth’s crust is and where the anti-gravity field is said to be.

Admiral Byrd was sent to the arctic by our government in 1927 to reach the North Pole, where he had an amazing incident occur which our government told him not to reveal. Before his death he came out with the truth about what had occurred to him and his navigator. How they flew the basic same pathway that Olaf Jensen and his father sailed and was met by beings inside of the earth. Subsequently, "...the admiral and his airplane crew accomplished a physical flight of seven hours duration in a northerly direction beyond the North Pole. Every mile and every minute of that journey beyond was over ice, water, or land that no explorer had seen...As progress was made beyond the Pole point, there was observed directly under the plane's course ice less land and lakes, and mountains where foliage was abundant. It does give you a lot to think about.

To see more of Dyhana's artwork, please visit her website. This is Week 20 of 52 Artists in 52 Weeks. Thank you for reading and sharing Dhyana's post today!
Posted by Unknown at 12:02 AM No comments: Links to this post 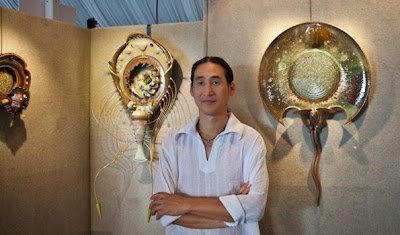 I was born in communist China in 1966 and raised in Shanghai and Peking. As a child, I had a natural gift for taking things apart and putting them back together again. At age 8, I made an entire Chinese circus out of child’s clay, with everything in miniature, including every act from bicyclists to twirling plates.

When I was 12 years old, my family immigrated to the United States and settled in Torrance, a suburb of Los Angeles, California. Sadly, my father died when I was in high school, and my mother, who had no job at the time, went to live with my sister, who was attending the University of California-Los Angeles on a scholarship. Left on my own, I lived in a friend’s garage while attending West High School in Torrance. To support myself, I worked after school at a number of jobs, preferring to wait tables or wash dishes at a restaurant for free meals.

During my high school years, an inspirational art teacher encouraged me to pursue my interests in clay and sculpture. In order to support myself in school, I also studied auto body and mechanics and eventually owned my own small auto body and paint business.

In 1991, I relocated to the northeast and became a full-time clay artist, selling my work at fine art and craft shows throughout the country. My early work was traditional and functional, and has gradually evolved over the years into decorative and abstract contemporary. In recent years, I have added copper wire to some creations.

Scuba diving is among my favorite hobbies and I strive to bring the colors of the water and sea life into my work. In an attempt to capture the transparent and light-reflective nature of water, I incorporate glass into some of my work.

Inspired by the energy and flow of nature, my decorative wall plates and sculpture are strong in their individuality and form. Each piece possesses an unmistakable spirit and is truly a one-of-a-kind piece of art.

The stoneware clay is wheel-thrown and hand sculpted into a unique design. Then I glaze the bisque ware before it is high-fired in a gas kiln. I add crushed glass during the glazing process to certain pieces. This is a long and delicate process, perfecting the fusion of stoneware and porcelain, glass and glaze.

I do about 24 shows per year, primarily along the east coast and the south, but have also shown in Texas, Colorado, and Arizona. I have won 55 awards at fine art and craft shows and have been featured in Ceramics Monthly and The Crafts Report. My ‘Soul Search’ fountain/lamp was shown at The State Museum in Harrisburg, PA.

My work ranges in price from $35-$6,000, and it is a constant effort to balance production demands with my artistic needs.

I want my work to not only be unusual, but evolutionary, as well as a continual discovery process for the viewer. For me, there is gratification in creating an echo of something greater than us within ourselves.

John's work is in many private collections throughout the United States and abroad. To see more of John's work please visit his website. You can also connect with him on Facebook.

This is Week 19 of 52 Artists in 52 Weeks. Thank you for reading and sharing John's post today!
Posted by Unknown at 1:30 AM No comments: Links to this post 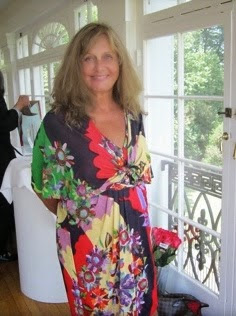 I paint as an exploration into the unknown with no idea of what is to come. With my dance background, I use bush-like movements of dance to create a beginning movement and very visceral expression of design, which comes from the body and the unconscious. 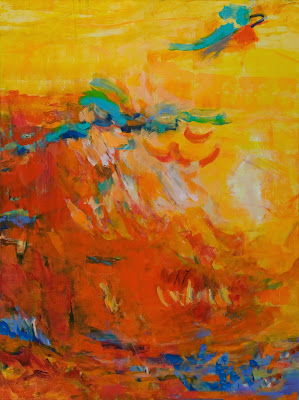 From there I begin to receive and pass it on to canvas -  I just paint - I let it come through. Later, I step back and look at it to see what the ‘child’ has done and where 'mommy' needs to clean it up a bit, according to the principles of design and composition and the craft of painting.

That opens up to me something that knows more than this so-called conscious self and gets me to move something through from underneath – the deeper layers, as if I’m a more or less an empty vehicle. If I am lucky, I try my best to catch its drift. 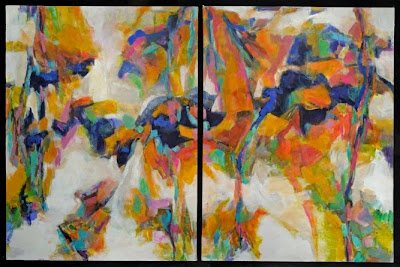 I work in layers and with luminosity, keeping areas open and clean, letting an inner light come through from inside. At some point there is a constellation and something appears and clicks into place. It is not anything I try to do but the surprise of seeing it and the feel of complete balanced work is satisfying.

But it is not too literal - this flow allows the viewer to often see many things, different things - different views as if the painting were alive. It does live, I hope. 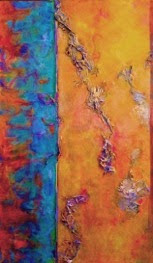 I find this work speaks of the emptiness and paradoxical nature of being: flying, within and without and the energy within could propel you away as if on a magic carpet; but it’s also grounded and humble, keeping the earth, water and sky relationship of the human being’s perspective.

I paint to relax and to balance myself, I go walking in nature, I dance, meditate, do yoga, read, and have a good time with friends! I have a rescued dog, Cody, an Anatolian femals shepherd; a seventeen year old kitty and a bunny, all of whom inspire me daily. I am also inspired by nature, and from the emotional stories I receive, from dreams and spiritual realizations, but none of it is literally painted. 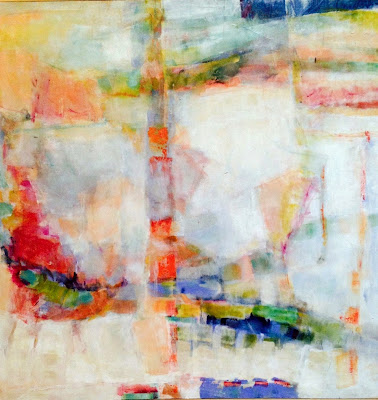 For example, when I went to the Caribbean, I didn’t paint while there but when I returned I found myself painting with those blues and washed out highly saturated colors, which have become something people associate a lot with my work.

When I have had amazing deep dreams, people say I should 'paint them' but that’s impossible.  But years later I find images of those dreams creeping into my current artwork!  It must have taken that long to fully process and release back into the consciousness - bring back to earth. That is fun part, when they just show up on their own. 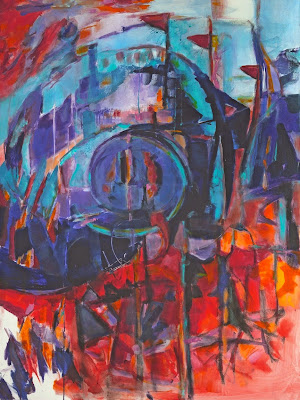 To see more of Amy’s work, please visit her website at www.amberblue.org. Her work can also be seen at the Foundry Gallery, www.foundrygallery.org, the Art League ofthe Torpedo Factory, VA; the MFA (Maryland Federation of Art) at CircleGallery, Annapolis, Maryland, and by appointment at her studio in Bethesda, Maryland. You can also find her on Facebook at Amberblue Galleries.

This is Week 18 of 52 Artists in 52 Weeks. Thank you for reading and sharing Amy’s work today!
Posted by Unknown at 10:57 AM No comments: Links to this post