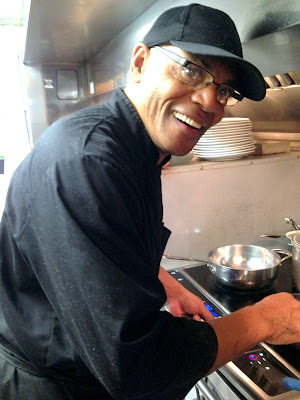 My life began in the Bronx, New York. When I was 2, my parents decided they wanted my siblings and I to grow up outside of the big city, so they loaded all 5 kids in the back of the car and drove out to California. We settled in the beautiful city of San Luis Obispo with its wineries, farms, sand dunes on Pismo Beach, and green rolling hills reminiscent of the Mediterranean region. It was here that I developed a passion for music and became a bass player. After living in San Francisco with my brother (a drummer) and other musicians, we moved back to New York City. I remained there for the next 30 years.

I found New York alive with food and music from all over the world. At first, I worked in a few bands, as a studio musician, supplementing my income with work as a server in a New York landmark restaurant called Sweets, which was founded in 1842.

Sweets was a family-run fine seafood establishment located at the South Street Seaport right across the street from the Fulton Fish Market. It was there that I learned about “old world” preparation and presentation of fresh fish. They used cracker crumbs to coat the fish and then clarified butter, before broiling and then baking it. The fish and seafood was as fresh as you can get, coming from across the street at the Fulton Fish Market every day.  The food was old fashioned New England style and delicious. If the market was closed, the restaurant was closed.

Part of my life in New York was dining in fine restaurants, learning about fine cuisine from chefs like Jean-Georges Vongerichten, Terrence Brennan at Picholine and Gabriel Kruther at the Modern.  In subsequent years I worked at Esca, a Mario Batali restaurant with David Pasternak, chef; Bobby Flay’s Bar Americain, and Bill Telepan’s Telepan, an artisanal restaurant on the Upper West Side of Manhattan.

I got to know these chefs by frequently dining in their restaurants. I asked them a lot of questions about food ingredients and preparation and they were excited to share their trade “secrets.” The chefs directed me to purveyors for spices, condiments, and other ingredients, sharing their recipes, tools, and techniques. I was fascinated by everything about preparing fine cuisine. I didn’t just want to eat it, I wanted to make it and discovered that I had a talent for cooking.

My confidence as a Chef came from Susan, my wife at the time, and Patrick Pinon at Sardi’s Restaurant, where I worked for 15 years, who inspired me to cook professionally. They taste-tested my food and encouraged me to nurture my talents as a chef. I started to read cookbooks and watched the Food Network (introduced in 1993) and cooked for whomever would try out my culinary creations (it wasn’t hard to find guinea pigs). I trained myself this way for more than 10 years. In 2010 I attended the French Culinary Institute for formal training.

I was also strongly influenced by the ethnic cuisines in New York City.  The flavors of India, Thailand, the Mideast, China, Mexico and Latin America were found in restaurants and street corners throughout Manhattan. My culinary style of combining world flavors with techniques of fine cuisine had emerged.

In 2006, I met my current wife, Donna Slawsky. We had a lot in common, both being musicians and artists. Donna had lived in New York City all her life and was ready for a change. I’d been in New York for 30 years and also needed to escape the hustle, bustle, and incredibly fast pace of the city. We lived in the West Village for a few years before beginning to explore possible places to resettle.

Sarasota, Florida was appealing because of its arts scene and its location on the Gulf of Mexico. We started vacationing in the area and decided it was where we wanted to live. One day, while staying on Anna Maria Island, Donna found an ad for the Village of the Arts.  She wanted to visit, being an avid art lover. We actually met Brenda Smoak at her gallery there on that first visit. We’d been looking for real estate as a possible investment and found a little cottage in the center of the Village of the Arts with a beautiful backyard space that was for sale. It was being rented out as a residence at the time. We bought the house with the goal of opening a restaurant and gallery sometime in the future.

In 2012, we began the renovation of the cottage at 1114 12th St. West in Bradenton’s Village of the Arts with the goal of opening a restaurant that served my cuisine and displayed the work of local artists and Donna’s mosaics.

The rest is history. Arts & Eats Restaurant and Gallery has been open now for 4 ½ years and has received glowing reviews. I’m so fortunate to have the chance to use years of self and formal training to create international dishes for our guests. Our menu features dishes from all over the world including Morocco, Japan, Italy, China, the Mideast, Thailand, and India. We want to introduce our guests to the flavors we experienced in New York and make them feel like they’re dining in our home.

Thanks to Brenda Smoak for this opportunity to share my story.  Food is love and art. Live. Love. Eat.

This is Week 14 of 52 Artists in 52 Weeks. Thank you for reading and sharing Jim’s story today. To connect with him, please visit the following links: