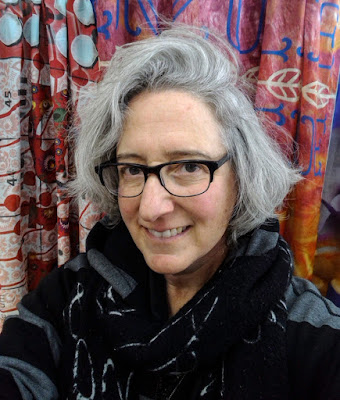 I have always had two main concerns: the limitations of rigid mental categories (subject/object, female/male), and language, or more broadly, communication. It seemed like studying philosophy would be the way to find out about this stuff, so that’s what I did in college, concentrating on the philosophy of language. I wasn’t very good at the academic mode and it was hostile to women. Later I thought I was abandoning philosophy to do creative work but I now consider my art practice to be the performance of philosophy. I started out wanting to stretch language to allow meaning to expand, so that our understanding would be less limited by the rules of language. I made physical texts as a book artist while honing my craft skills: letterpress printing, hand bookbinding, typography, printmaking. At that time digital tools were just beginning to be used for graphics, and I have used them since as a graphic designer.


Finding my “home” medium—printed digital art—had to wait until the tools developed in sophistication and affordability. In the early 2000’s I embraced photography as a central mode of image making, maybe because I had a small child then and needed to work fast. Soon after I sold my letterpress equipment before moving to the DC area and converting to (mostly) digital tools. This is when I started to really find my artistic voice. I found the “veracity” of the photographic image useful for playing with the idea of reality, and the digital manipulation tools I had learned as a graphics professional helped me mess with mental categories by making visual mashups.


As for my interest in communication, I continue to use the visual embodiment of words for artistic and political effect. This is a rhetorical tool I use in my current and biggest project, the Female Power Project (FPP), to express the time period, urgency, message, or the character of a person. I try to distill a message into as few fresh words as possible.

I started the FPP in 2015, integrating words and images into complex digital designs on shawls to embody the attributes of remarkable females. These messages can be worn on the body and incorporated into an individual’s life. Two years later, smooshed in the crowd at the DC Women’s March, I knew I have to work faster because of the speed of events, so I began making digital prints. First I made a series of complaint graphics. Then I went back to the Female Power idea and focused on POSITIVE actions.

I pluck messages out of the rushing flow of events and solidify them in my pieces. The messages are general, but most prints are about specific women or specific events. Sometimes I take current memes and relate them to past events. An example is “Nevertheless She Persisted” applied to Ruby Bridges on the steps of William Frantz elementary school in 1960. “Ruby Bridges Persisting” therefore becomes an archetype AND a demonstration of what is at stake politically. Nasty RZY (“Rosie”) works use an image based on a well known “Rosie the Riveter” graphic to express something traditionally problematic in women: anger. I use embroidery as a medium expressing “femininity.” I’ve discovered that I really really like to embroider letters. I love type so much. Also, embroidery turns out to be a lot about stabbing with a sharp object.

The FPP is connected to the place I am (the DC area) and where I directly sell my work (my retail studio, Black Lab, and art/craft fairs). Interacting with the public about the works is part of a social practice that feeds the development of the objects and performs a service to the viewer. When people see my work they are moved to tell me their stories (e.g., a Katrina refugee from New Orleans) or stories about women they know (e.g., a man who works at the National Archives and knows about many interesting important women most people don’t know about). Workers at Department of Justice crowd my booth needing prints about Ruby Bridges to reinforce their commitment to educational justice. Ruby’s story is part of their origin story. In the Female Power Project, commercial exchange is a social practice and messages about women as leaders are absorbed into the lives of my “customers.”

The Female Power Project is about the creation, dissemination, and amplification of feminist messages using techniques of visual, verbal, and performative rhetoric. I started using the tagline “Imagination is the Seed of Power” because it is what I believed, but I felt like maybe it was a bit goofy or moon-glow. But then I heard about implicit bias research, which I refer to in the next paragraph. It is cognitive SCIENCE, y’all!

“One of the less intuitive revelations of recent work in cognitive science is that a failure of imagination can actually produce a failure of vision.”*

*Lili Loofbourow, referencing the work of Christopher Chabris and Daniel Simons in her article, “The Male Glance.” Read it here:
https://www.vqronline.org/essays-articles/2018/03/male-glance

My goal with the Female Power Project is to expand our imaginations so that we can see that women are leaders. Female Power Project objects remind us that women are strong and capable and have always been taking action to improve all of our lives, including the action of expressing anger. Because of the history of women’s oppression, these actions are often heroic and are messages we should celebrate. Women’s experience is human experience. Our species and our self-knowledge can ONLY be ENRICHED by the inclusion and validation of the experiences and viewpoints of previously marginalized humans. Our arbitrary categories are holding us back and we need to enlist the creativity of everyone to face our planet’s problems.

This is Week 15 of 2018 ArtistsTell Their Stories. Thank you for reading and sharing Leda’s story today. To connect with Leda and see more of her work, please visit the following links: