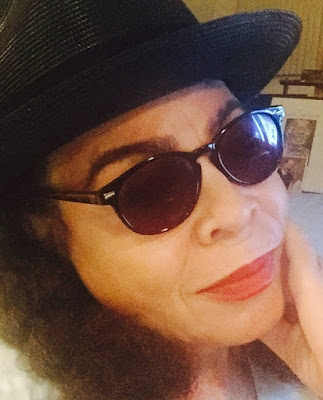 I arrived in NYC late 1970. Everything and everyone appeared so “cool” to this young artist and mother. My Boston accent was a novelty to a close-knit group of friends who are still comrades today. My neighbors were Taj Mahal and Miles Davis. Morgan Freeman told me if I stopped biting my nails I might be attractive and Liza Minelli suggested I wear my bra on the outside of my leotard. Donny Hathaway’s apartment was next to mine so I was invited to hear him play piano.

One day walking through Central Park Ivan Dixon winked at me and Geraldo Rivera was introduced as Gerry Rivers. James Baldwin’s brother poured my drinks and I lunched with a very young girl named Natalie Cole and her mom. I met Isabelle Washington Powell. We called her Belle. Belle lived in the heart of Harlem and was Congressman Adam Clayton Powell’s ex- wife. Belle had been a dancer at the Cotton Club. Her sister was the actress Fredi Washington and one of her best friends was Jean Claude Baker whose adopted mom was the great Josephine Baker. Jean Claude commissioned me to do Josephine’s portrait as well as her sister Margaret Wallace’s portrait.

I painted Winton, Max and Monk. I exhibited with Gordon Parks and Robert Mapplethorpe. I visited the studios of Larry Rivers and Benny Andrews.  My life in NYC was rich in life lessons, old-age wisdom, youthful drinking and unforgettable lovers. I still live with the scents and sounds of the days of my youth spent living and learning that life ahead would be an ongoing series of adjustments. I also learned that men who only wanted pretty women lacked imagination and that to grow older does not mean to get old!

My artist philosophy is heavily influenced by African-American Artists, Charles White Jr., Augusta Savage, and Chicano Artist, Luis Jiminez. Charles said he, “used Negro subject matter because Negroes are closest to me. I am trying to express a universal feeling through them, a meaning for all men. All my life, I’ve been painting a simple painting. This does not mean that I am a man without anger – I’ve had my work in museum’s where I wasn’t allowed to see it. But what I pour into my work is the challenge of how beautiful life can be.”

My work is the continuation of his efforts. After resigning from the WPA in 1939, Augusta Savage opened the Salon of Contemporary Negro Art in Harlem, which was America’s first gallery for the exhibition and sale of works by African American artists. Works exhibited included those by Beauford Delaney, James Lesesne Wells, Lois Mailou Jones, and Richmond Barthe. The gallery was not financially successful, however, and was forced to close after
several months.

My gallery in Oakland, California, was based on Augusta’s efforts and suffered a similar fate after eight years. She too had a child when she was 16 years old. Luis Jimenez made sculptures for public places, intended to be seen and understood by thousands of ordinary people, in many cases, of Latino descent, who would pass by them every day. Jiménez's art had many aspects, but for me its most distinctive characteristic was the way it was structured to appeal to a variety of audiences.

After fifty years of a blessed career I am now entering the next phase in my evolution. My vision is continually amplified by a growing interest in what lies beyond the faces of the people I encounter, I see a global network of subjects including artists, curators and creative thinkers working collectively in hybrid ways spanning and driving curiosity as it applies to our changing “Culture” as a whole.

My art is like a “Ballad Poem” traditionally meant to tell a story; an un-transcribed narrative preserved for generations, passed along through imagery. My subject matter deals with religious themes, love, tragedy, domestic crimes, and political propaganda, only I don’t tell my viewer literally what is happening, I show the viewer what’s happening by implying crucial moments through the face, a figurative stance, or the angle of the eyes - each stroke is meant to convey a sense of emotional urgency of what some might call the “lower class.” My art is biographical.

I find myself now in the gap where my art practice, knowledge production and research process operates; it’s that tension between and beyond recognized paradigms that motivates me. I’m encouraging active viewer-driven learning over passivity because that is what made me an artist in the first place and how I’ve reached this stage of my career.

I believe interaction between my audience and myself creates opportunities that promote new imagery, dialogue and collaboration between artists, writers, curators and thinkers across cultures driven by audience desires rather than demands of an elite, often exclusive, art world where art equals real-estate. I want to remain agile, responsive, nomadic.

With mature new images I hope to contribute and capture a unique public narrative whereby my subject matter revolves around the collective human condition and is rooted in my people and our culture. My concept for Culture As A Way of Life/Paintings is to share a humanistic philosophy with my 70-year-old sense of social responsibility. I’ll continue my career commitment to archive Black society from a Civil Rights to Contemporary perspective.

My plan includes the development of a series of mixed-media paintings celebrating family, endurance, spirituality, and the diverse range of Black experience over the last 40 years. These paintings, acting as reflections, will hopefully overturn some common ideas about Black life from l975 to present, demonstrating a changing Black culture. Culture As A Way of Life/Paintings will investigate the metamorphosis of what is understood as Black culture.

This is Week 29 of 52 Artists in 52 Weeks. Thank you for reading and sharing Gale’s story today. To connect with Gale and see more of her work, please visit the following links: