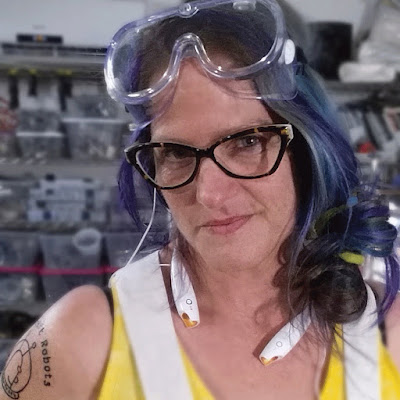 Crying with shame I told my sister, “You have no time, no space, and no money, but you’re making art. I have access to all of those and haven’t really created anything in 3 years.” So she set about helping me find my next creative direction. That was in February of 2010. By May I was showing my very first CyberCraft Robots.

My degree is in Computer Information Systems. Math and science have always captivated me and as soon as I was introduced to science fiction at the age of 10, I began a life-long relationship with that as well. In our current culture in which most kids grow-up with or at least around computers, there is not a strong disconnect between the people who "do math/science/computers” and the people who “do art,” but long ago in the distant land of my little high school, these were two groups of students who rarely mixed.

My mother is a fashion designer, my dad creates custom-designed furniture, and my sister has been an artist from day one. Still, while I was reading that first sci-fi book, I decided going to be a physicist.  That goal evolved over the next decade but I knew I was going to do something that involved a lot of math and zero friggin art!

So I went to college and studied computers and logic and math and physics. I got a groovy computer job and traveled and got to live in Vermont. Yet for the 16 years I worked with computers, first quietly and then more and more loudly, my soul was letting me know I needed a creative outlet.

In college I had almost as many music credits as physics. After graduation I got involved in Community Theater and did some singing. Eventually a crisis led me to an art therapy class. I had never allowed myself to have art supplies (those were for artists) but hey I had PAID for this class so I was going to USE the supplied art materials. Well that paint, clay, and paper kindled a fire in me.  Thus began the countdown to the end of my computer career.

In 1998 I walked away from the security of that work. This set me up for a whopper of an identity crisis and lead to several years of trying to find my artistic voice. Just about the time I was honing-in on something that I enjoyed doing and that allowed me to say what I wanted to say – just as my work was beginning to be noticed by collectors and critics - my dear husband, David, became very ill. I stopped creating art. We moved. He got worse for a very long year – and then he had a lung transplant and recovered nicely over the following year . . . and yet another year went by. He was still doing well and I was still not creating anything. I had lost myself.

In February of 2010, my sister, a creative powerhouse with 4 kids and a workroom the size of a closet, came to Florida for a visit. I confessed that I had tried to restart some of the sorts of work I had done in the past, but nothing sparked – I had no joy or passion of any kind. I had given up without much of a fight . . . big L on my forehead.

She said, “Let’s look at what you love.” We looked around my house.  Sci-fi books all over the place with art books sprinkled in here and there . . . and 5 of those books were about working with metal. I had never worked with metal. I didn’t even realize I had collected those books. That seemed significant.

We went to one of those bookstores that has a bizzillion different kinds of magazines about almost every subject. She told me to just walk around there and see what drew me in. I saw a publication about making art from repurposed materials. I had begun working with found objects just before my husband got sick. Assemblage sculpture fascinates me and I loved the bit of it I had tried. This booklet showed a thousand different ideas, many of them assemblage, many made from metal, some with a mechanical sort of feel. Puzzle pieces started fitting together. Lights started blipping in my brain.

I decided I wanted to make some robot sculptures from metal and glass found objects. BUT I knew I would need a bunch of stuff (aka materials) that I didn’t have, and a place to keep the stuff, and a space to work. It would be a while before I was ready to try the sculptures, so I decided that while I was gathering “stuff” I would try something else that interested me.

I love midcentury modern imagery. I decided to select a limited pallet of period appropriate colors and create some small, basically decorative paintings that would work together in groups. My sister had a funky, fun gallery back home and she would give me an outlet for the paintings.

While I was researching colors and making other decisions about the paintings, I also hit the jackpot of “robot parts.” My first time out I found the estate sale of a gentleman who had worked on Ford automobiles for his entire life, beginning with the Model T. He had parts and bits from all of those years. I was so excited I canceled a hair appointment and made multiple trips to the sale. They just wanted “rid of that old junk in the garage.” I don’t remember what they charged me but it wasn’t much.  Less than that haircut was going to cost!


But I still didn’t have a place to sort and keep all those lovely metal parts, nor the tools (or skills) or space to do the work. So I kept researching the painting idea . . . but my mind kept coming back to robots. I had dreams about robots. I would fade-off in the middle of a sentence thinking about robots. I thought about how I might build them and I imagined their stories and back-stories. My brain was flooded with a whole history and mythology. Robots were making it very difficult for me to think about paintings.

AND THEN our water heater burst and flooded half of the garage.  That garage had been stuffed to the ceiling with boxes we stuck there when Dave was so sick and had never revisited. We hauled all of those belongings into the driveway. After things had been tossed, reorganized and replaced we had added two strong work benches and a couple of hefty metal shelving units where I could sort and store LOTS of metal and glass goodies.

Not a single tube or drop of paint was ever purchased. I had everything to learn and didn’t even have the right tools, but I was gonna build some Robot Sculptures!

This is Week 32 of 52 Artists in 52 Weeks. Thank you for reading and sharing Sarah’s story today. To connect with Sarah and see more of her work, please visit the following links: